Last Friday, when I went down to Dummerston to help go through more stuff of my father's, I visited the Scott farm in Dummerston Center.  I talked to Zeke (Ezekial) Goodband (sp?) about some of the old varieties of apples they specialize in and tried some of his favorites: 'D'Arcy Spice' and 'Orleans Reinette'--I bought a couple 'Esopus Spitzenberg' which is another of his favorites.  I already have a tree of 'Esopus' and I have tried and like that apple which I think may have been Thomas Jefferson's favorite.  These three apples were Zeke's favorite tart apples.  I also bought a few 'Winesap' which is my favorite apple of all, a couple 'Sheepnose' which I've heard of but not ever tried and some 'Calville Blanc d'Hiver' which I have a tree of but have never tasted.

Another apple I am on the look-out for is the 'Reinette Simirenko' which Michael Phillips told us about--it's similar to a 'Granny Smith' but does well in the north (it's a Russian apple, developed in the 19th cenury by Simirenko.
Posted by chris--thenurseryguy at 1:06 PM 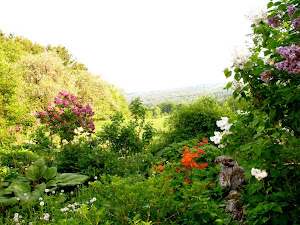